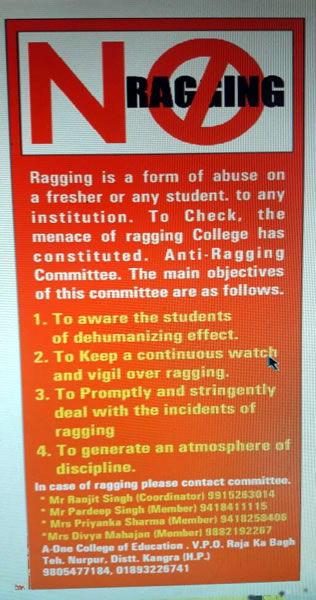 Actions to be taken against students for indulging and abetting ragging in technical institutions Universities including Deemed to be University imparting technical education:-

1. The punishment to be meted out to the persons indulged in ragging has to be exemplary and justifiably harsh to act as a deterrent against recurrence of such incidents.

2. Every single incident of ragging a First Information Report (FIR) must be filed without exception by the institutional authorities with the local police authorities.

4. a) Depending upon the nature and gravity of the offence as established the possible punishments for those found guilty of ragging at the institution level shall be any one or any combination of the following:-

b)An appeal against the order of punishment by the Anti-Ragging Committee shall lie,

5.The institutional authorities shall intimate the incidents of ragging occurred in their premises along with actions taken to the Council form time to time.

Action to be taken against the technical Institution, University including Deemed to be University imparting technical education which fail to take measures for prevention of ragging:-

2. The technical Institution, University including Deemed to be University imparting technical education should submit an affidavit along with its compliance report submitted to AICTE annually with details of measures taken for prevention of ragging in technical institutions.The Compliance Report should also contain the details of the instances of ragging and action taken against students, and others for indulging and abetting ragging.

4. The AICTE shall, in respect of any institution that fails to take adequate steps to prevent ragging or fails to act in accordance with these Regulations or fails to punish perpetrators or incidents of ragging suitably, take one of more of the following measures, namely;

5. As regards the Universities including Deemed to be Universities imparting technical education the actions proposed to be taken such as stopping release of grants, withdrawal of approval/recognition will be sent to University Grants Commission (UGC), Ministry of Human Resource Development (MHRD), Govt. of India and the concerned State Govt./UT. The UGC, MHRD Govt. of India, and the State Govt./UT concerned shall initiate immediate action on the recommendations of the Council.

A-One College of Education offers providing all the basic amenities and infrastructure to the aspirants.